How To Cut The Fringe
Thankfully, the men's fringe trend in 2010 comes in a variety of lengths, so you're going to be able to play with the look to suit your face shape. While you'll be looking to keep shorter back and sides (British grade 4-5), the way of truly making it your own is to play with the length of the fringe itself. No better example exists than the Bottega Veneta Men's Spring-Summer 2009 catwalk which provided two fringes in stark contrast to each other: 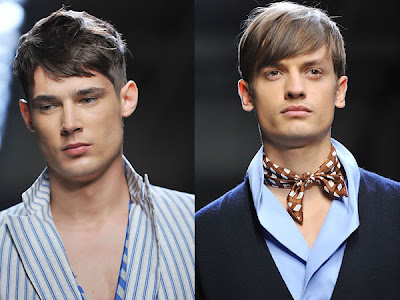 Of the two, the latter side swept fringe is the more preferential, with the cropped fringe looking a little too nondescript. If the side swept fringe does look like a hair style you might wear, be sure to check out Marni's menswear Fall(Autumn)/Winter 2008/2009 catwalk collection where it was a look sported by most of the models.

Personally, I'd recommend something far more current and cut your fringe with texture and at brow length as seen on Burberry Prorsum's Men's Spring/Summer 2009 catwalk (below).

How To Style The Fringe
Whether you take a straightening iron to your hair or enjoy naturally straight hair, the men's fringe trend in 2010 is all about texture. I'm not talking about afro-inducing curls akin to those spotted on Alexander McQueen's Fall(Autumn)/Winter 2008/2009 runway (those were horrible) but light, layered detail. And in giving us the best length, Burberry Prorsum also featured the best textured styling for the men's fringe: 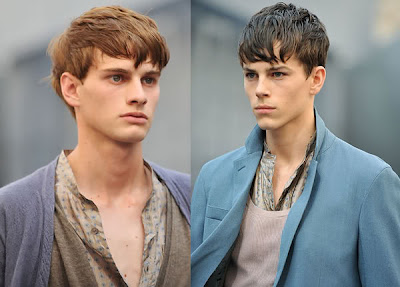