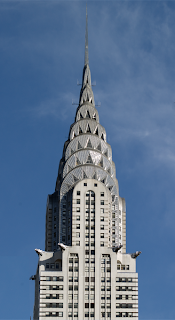 The 1027-30 Chrysler
Building, New York.
The cone meets the cube.Yesterday, (just below) I expounded on the virtues and vices of Art Nouveau. In doing so I positioned it as easing the transition from Victorian fussiness to Modernism. It was that, but quite a great deal more. Art Deco was the essence of Modernism in its early stages, the starting point from which all we now consider "modern" in design originated. Art Deco grew out of two major factors in human development--the need for speed and industrialization. Speed demands a pointed, smooth, sleek, lean design. Industrialization demands simplification, standardization, practicality, and usually rectilinear, structure. Though, at times, these two factors conflicted with one another both in their functional as well as their design elements, they also very often complemented one another, alleviating the tendency for stylistic applications to become staid and boring over time. They were flexible. Aviation is a prime example. The "boxy" Ford Trimotor (below, left) of 1927 gave way to the "streamline" Douglas DC-3 (below, right) of 1936. ﻿ 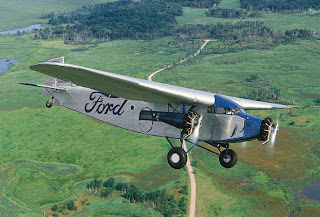 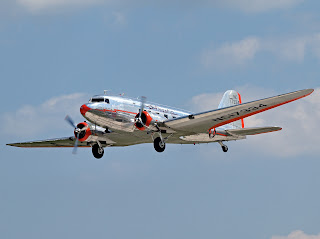 This timeline, the 1920s and 30s, often called the "inter-war" period, clearly delineates the height of Art Deco dominance in virtually all areas of design from aviation (which had a huge influence) to automobiles, sculpture, architecture, graphics, painting, even fashion design. If one had to come up with a single word to exemplify the look and style, it would be "sleek." Though today, the word seems hopelessly dated, having given way to "slick" and "chic," and a number of other evolutionary synonyms, during this turbulent period, it was "cool," it was "modern," it was the epitome of glamorous luxury and exuberant optimism in technological progress. It was not just futuristic, but was seen as the future itself. 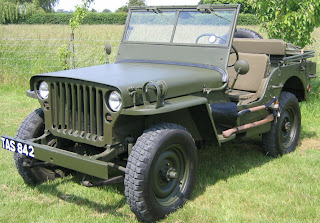 Art Deco goes to war. Combat proved fatal.Of course, the future turned out to be something quite different--the most ghastly war in the history of mankind. William van Alen's 1930 Chrysler Building and Carl Breer's sleek Chrysler Airflow (top) of 1934 gave way to the industrialized, bug-ugly Willys Jeep in 1941 (ironically, today built by Chrysler). Still, Art Deco flourished in the wartime posters, in the movies, even in the minimalized 1940s female fashion world of short, and slender skirts (below, left) and sleek slacks (below, right) of the period. 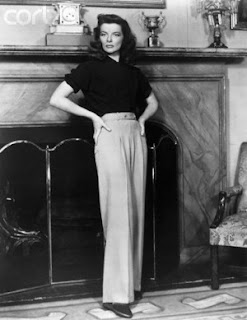 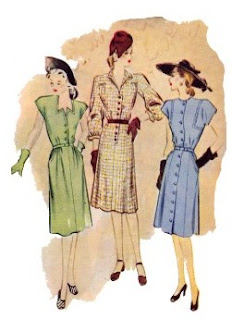 Art Deco fashions survived the war. It's trite to say that the war changed everything. And it's not entirely true, but in the world of art, such a broad statement may be more nearly factual than in any other area of human endeavor. Painting and sculpture used Art Deco as a launching pad into an otherworldly realm of abstraction and simplification of form barely imaginable before the war. Where objectivity was vital, the hopeful exuberance of the Art Deco triumphed as never before. Rocket science invaded the world of auto design and Bauhaus industrial rectitude engulfed architecture. In motion pictures, silly science fiction gave way to 2001: a Space Odyssey while in music swing turned to pop, then to rock, which evolved into an acidic future far removed from the optimistic fervor of its Art Deco antecedents.